You are here: Home / *Permafree and Permabargain Books / Bargain Books Under $3 / Death of a Honeymoon by M K Scott 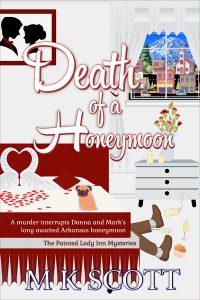 Death of a Honeymoon by M K Scott

Detective Mark Taber and his new bride Donna, an amateur sleuth, are ready to take a much-needed break from crime-solving and finally enjoy their long-awaited honeymoon in the quartz-rich mountains of Arkansas, but unfortunately for them, crime never takes a break.

When their car breaks down at the site of the first murder the county has seen in a century, they find themselves in a bind – no transportation and at the center of an overwhelming firestorm for an overworked sheriff. He needs their help.

Will they temporarily forgo their plans to find a murderer or will the possibility of netting quartz clusters and county fair winning recipes pull them in another direction?

What Inspired You to Write Your Book?
A honeymoon naturally follows the marriage of veteran detective Mark Taber and amateur sleuth Donna Tollhouse. Readers were are also waiting for the honeymoon since it was delayed in the previous book due to Gen Con.

How Did You Come up With Your Characters?
The initial characters are based loosely on my husband and myself.

Book Sample
A siren finally sounded after what had to be the longest ten minutes of Donna’s life. After the initial shock of seeing the bloody body and having a tiny hissy fit about just once she’d like to go on a trip where no one died, Mark handed her a root beer and a sleeve of chocolate sandwich cookies. He left the money on the register, not sure who’d take charge of it.

They’d moved out to the shop, then decided to wait outside. She bit into a cookie as she watched the dated police car struggle to get up the rocky incline. “Our fingerprints are everywhere inside.”
Mark cut his eyes in her direction. “The innocent have nothing to worry about.”

He obviously didn’t watch many movies. The innocent often ended up in prison because they thought not having done the crime would be self-evident.

The car came to a stop at the crest of the hill, and the driver’s door swung open. A heavy-set, gray-bearded man dressed in a khaki uniform clambered out. He reached back inside the car for his hat and placed it on his head.

Before the man could head their way, Mark met him halfway and held out his hand. “Detective Mark Taber, Legacy, North Carolina.”

“Sheriff Beauregard T. Clemmons. Most folks just call me Beau.” He grasped the outstretched hand and gave it a firm shake before releasing it.

“Beau.” Mark repeated the name. “Glad to meet you. Sorry about the circumstances.”

Even though she could hear okay, Donna worked her way closer. You never know when a passing car might drown out whatever was being said. If she asked Mark, he’d give her the condensed version. The man could take an epic novel such as Gone with the Wind and reduce it to a sentence. Even though his version might be true, it would leave out a great deal. A car door slammed as she made her way closer.

A woman’s carefully constructed hairdo appeared above the police car roof. Donna hadn’t noticed anyone else in the car. The angle of the sun hitting the windshield prevented easy viewing. The woman came around the car, attired in a sleeveless flowered blouse and pink pedal pushers. Definitely not a deputy.

The long-suffering look the sheriff shot her hinted that their relationship was long-standing. “Maggie, I told you to stay in the car.” Beau turned back to Mark and added, “I was at the Piggly Wiggly grocery store when we got your call. My wife had to pick up a few things.”

“Maggie, please!” Despite his comment, the sheriff looked doubtful his spouse would listen.
Instead, Maggie smiled at Donna. “On vacation?”

“We are,” she answered, not wanting to say too much and miss hearing what the sheriff might say.

“Terrible thing. Most people don’t want to be a part of a murder on a regular day but on a vacation…” She let the words hang and shook her head. “Pitiful.”

Buy this eBook on Smashwords